A Letter of Acknowledgement 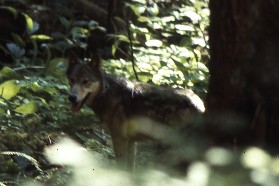 From 1977 to 1980 I did research and field studies on Vancouver Island, where I was born. This research, couched in scientific language, made up my Master’s Thesis entitled “The Vancouver Island Wolf: A Study of the Social Organization and Food Habits of Two Packs.” As a treatise, this speaks nothing of how months alone in the wilderness constituted one of the most formative experiences of my life. Direct, immediate experience in Nature, without the filters of civilization. The translation to scientific language never tells the real story.

Now it’s time to write that real story with all its characters, the political/economic pressures, jealousies, and ill will driving government and academic institutions.

Dear Dr. Shackelton, I have read the thesis submitted by Barbara Scott as part of the requirement for the Master of Science degree and find it fully satisfactory for the degree….Barbara has tackled a difficult task demanding not only technical competence and analytical skills but an unusual degree of woods wisdom and physical courage. The biological details in her study øf the wolf in the Vancouver Island forest ecosystem include significant new information. She has revealed some of the highest densities known among wolf populations. Although she makes little of it in her treatment of her data her documentation of the movements of the single nomadic individual she encountered and radio collared is truly a remarkable accomplishment. No one previously has demonstrated such a range of movement. The amount of aerial  search reflected is remarkable in itself, but she would never have found the animal in its successive locations had she not exercised unusual insight of a predictive nature.

This demonstration of the nomadic propensity of some individuals throw important light on a number of occurrences of wolves that have shown us in once inhabited range hundreds of miles from existing populations.

I have enjoyed my association with this project and send my warmest good wishes to Barbara for future success.

This is a letter of acknowledgement from Dr. McTaggart Cowan, one of the committee members for my thesis.  Still active at the age of 96, Dr. Cowan has devoted a lifetime to studying, teaching and conserving the natural resources of British Columbia.

This site uses Akismet to reduce spam. Learn how your comment data is processed.